December 11, 2017
In his fifty years at the British Museum of Natural History, John Edward Gray described 306 reptile species (1)(Uetz, 2010). It would appear that he was a classic “splitter”;  naming one species under several names. One group that benefitted from Gray’s nomenclatural creativity is the genus of six species of large river turtles, Batagur. When he named the genus, he gave no etymology and none has since been deduced, leaving the word without meaning other than being a genus of turtles.

This genus has been at the heart of scientific exploration of the 19th century and has seen the struggles of European colonisation of Asia. Members of the genus have been revered as the property of Royalty and most populations have been decimated through their harvest of adults and eggs. Batagur contains five of the twenty-five most endangered species in the world (TCC, 2011). Consequently, Batagur turtles have been the subject of innovative conservation breeding efforts, taxonomic and genetic analyses, and provide an intriguing case study for biogeography in terms of dispersal and speciation. 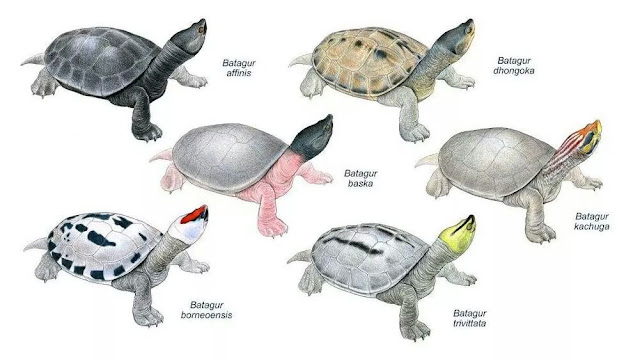 My own interest in turtles has taken me up Australia's east coast chasing long-necked turtles (genus Chelodina), studying the turtle trade in Cambodia (Holloway, 2000; Holloway, 2003a), work at the turtle rescue and rehabilitation centre in Cuc Phuong National Park, Vietnam, spend time studying B. affinis in Cambodia (Holloway, 2003b), and Malaysia, and even to have contributed to the description of a new subspecies, of B. affinis (Praschag et al, 2008).


This blog is intended to explore the current knowledge of the genus Batagur and examine the many features that make these turtles beautiful and bewitching beasts.

Popular posts from this blog

The Malay peninsula plus Sarawak on Borneo are the home to two species of Batagur: B. affinis(both subspecies: B. a. affinis and B. a. edwardmolli) and B. borneoensis (Iverson, 1992). These two species coexist in some rivers while vast differences in mating and nesting isolate the species from interbreeding. They have both been reported as existing with Sonneratia spp of Mangrove Apple trees (Guntoro, 2012a, Holloway, 2003), the fruit of which was long-thought to be a staple of the species.

The Malay names for Batagur species is "Tuntung," an onomatopoeic name that either reflects the drumming sound produced by females as they drop their plastron onto the sand to disguise their nest after depositing the eggs (Moll, 1978) or the sound of the eggs exiting the cloaca and dropping onto the other eggs (Guntoro, 2012b). Use of this as a name reflects the most visible time for the species as they historically nested communally, sometimes in huge numbers. …
Post a comment
Read more

Happy World Turtle day to all Batagur turtles and people

I have just finished celebrating World Turtle day for the year, where I continued to teach my year 11 biology students about the function of kidneys but made it specific to turtles, which worked great as there is tremendous variety in the nitrogenous wastes they produce; and I was teaching my year 7 class about human water management and then went through an exercise of how this influences turtle populations in Cambodia (though they're also hugely impacted here in Australia, I know much less about them and so went with the more straight-forward option for myself). Pondering this day, I thought about what is going on for the different species of Batagur: is there anything to celebrate, or is it all doom and gloom?

News looks pretty good for the Burmese Roofed turtle, Batagur trivittata, which just saw the successful hatching of 46 hatchlings which are set to be headstarted for 5 years before release into the population, thus reducing their mortality rates in t…
Post a comment
Read more

Rohan
I was born in Australia and raised between here and various countries in Asia. While I was keen on the Teenage Mutant Ninja Turtles as a child, it wasn't until some good friends and fortunate opportunities struck at the age of 19 that I was bitten by the turtle bug. I've worked on the turtle rescue centre in Cuc Phuong, Vietnam and with Batagur affinis in Cambodia an have been fortunate enough to work with some of the most preeminant turtle researchers in the world.